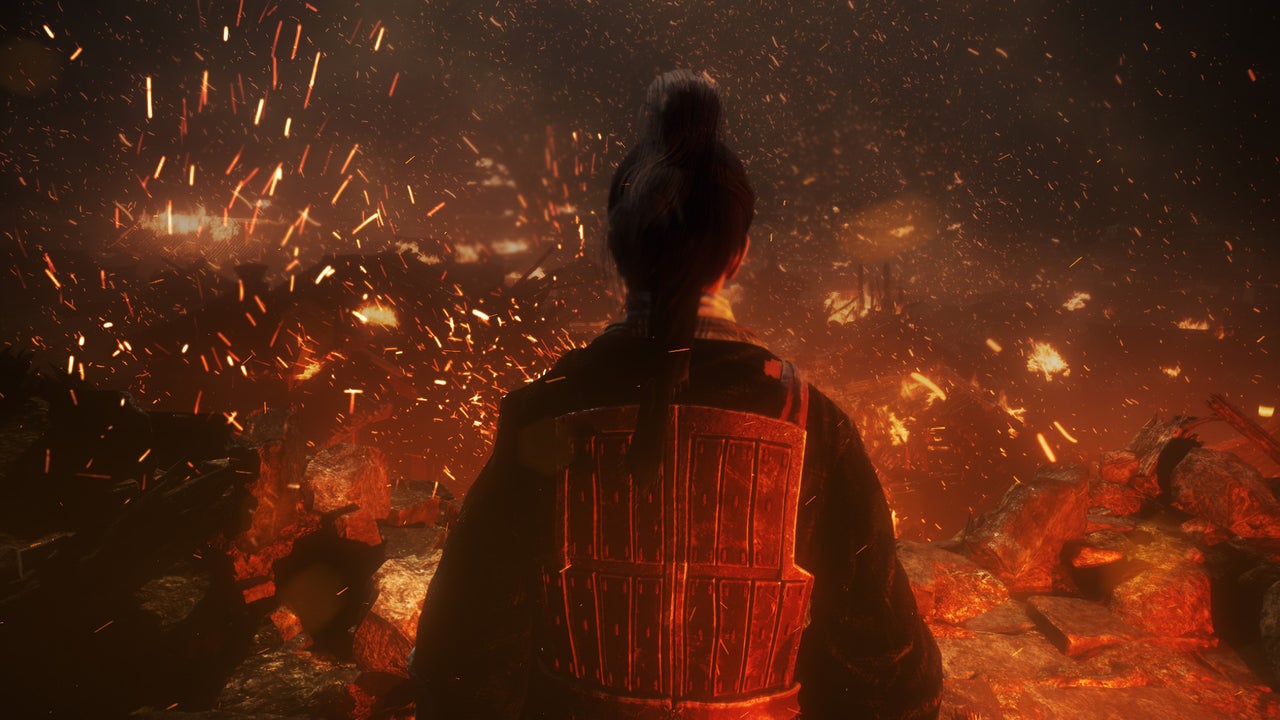 30 minutes from the start of play, the impression is one word “hard”. I’ve beaten most recent Team Ninja games such as the Nioh series and Stranger of Paradise Final Fantasy Origins, but when I first picked up this title, I couldn’t help but be surprised at how difficult it was. That said, it’s not a simple game, but once you get the hang of it, the dizzying high-speed action draws you in quickly. Wo Long: Fallen Dynasty adds new systems to the Masokoa base to create impressive Chinese martial arts-themed combat. The game made me cry and moan at first, but by the time three hours had passed, my brain was releasing so much dopamine that I couldn’t put my controller down. Let’s talk about what Also note that this demo was played in single player on his PS5 with a DualSense controller.

The game starts with character creation and both male and female options are available. The character modeling in the game is of very high quality, and various settings such as facial contours, eyebrows, eyes, pupils, noses, mouths, hairstyles, skin, beards, and makeup can be finely adjusted. Even after you’ve chosen your face contour, you can customize details like forehead placement, cheekbone placement, and even cheekbone definition.

At the end of character creation, you choose a phase, or class for your character in a standard RPG. The magic spells you can use depend on which of her five phases you use. I started playing the game by choosing an attack-focused launch phase.

The demo I played placed me in a mountainous area after completing the tutorial. There were no cutscenes, so I didn’t learn anything about the story. This demo seems to have been made just for the enjoyment of exploring and fighting the game.

I proceeded from these hills into the cave area, placing most of what I saw in the vastness of China’s natural landscape. I was intrigued by the Chinese feel of the supernatural demonic enemies and the unsettling dark fantasy elements throughout the game.

Now let’s take a look at the true charm of this game, the battles. Even though you’re playing as a nameless volunteer, when you actually play it, it feels like you’re controlling a ninja. Your character’s agility is like an exaggerated form of Chinese martial arts quickness. I could have started with a double jump and kicked a wall in the middle of the jump to reach even higher places. It also makes good use of aerial attacks as there are many objects such as rocks in the area that can be used as platforms. The overall speed of action is part of what makes this game so special.

There are two basic forms of melee attacks: basic attacks and mental attacks. Basic attacks use whatever weapon the character has, and performing these will increase the spirit gauge. When this bar starts to fill up, you can use it to make more damaging spirit attacks.You can also equip up to two melee weapons and switch between them.

Using and managing the Ki Gauge is an important part of combat and can be used for both martial arts attacks and magical spells. Martial arts attacks are special moves that vary depending on the weapon used, while magic consists of elemental attacks that use the power of phases to control things like fire and water.

Many of the low-level enemies that stand in your way can’t be defeated with basic attacks alone, so you’ll have to break through them with powerful energy gauge attacks. As for melee weapons, I had the opportunity to try out Swords, Straight His Sabers, Glaives and Dual His Swords. I have the impression that Glaive, which has both attack power and reach, was the easiest to handle. Also used ranged weapons in the form of bows. To control it, line up your shots with L2, then fire with R2. I used it primarily as a ranged weapon while exploring, and it did a decent amount of damage. It was a little disappointing that the number of arrows was limited and they ran out quickly when I got into the mood.

Players will also travel with Divine Beasts. You can choose from 5 types of beasts: Kirin, White Tiger, Seiryu, Suzaku, and Genbu. It can be summoned separately with the Divine Beast Gauge, but it can also be used for “Divine Beast Resonance”, which summons and fights together for a certain period of time, or grants special effects such as buffs. While playing Vermilion Bird, I didn’t have many opportunities to use the build-up meter, and I regret that I didn’t find a good way to use it.

To summarize the default button settings, square is used for basic attacks, triangle is used for mental attacks, X is used for jumps, circle is used for deflection moves detailed later, L1 is for block I felt this was the ideal layout for easily inputting combo attacks that I’ll discuss later.

Combat in this game does not use a stamina gauge like in the Nioh series. Instead, it stands out with a chain of stunning Chinese martial arts attacks. However, the enemy has a solid defense, so you won’t be able to get through the fight just by mashing buttons.

About 30 minutes into the game, I was thinking about how difficult my fights were. As I spent more time playing the game, I learned how to fight effectively through trial and error.

Counters, Spirit Gauges, and Combos are the 3 keys to unlocking exciting battles

Battles in Wo Long are fast-paced, and even basic enemies have solid defenses. It will block almost anything if attacked with just its normal attacks, but will counterattack when defenseless and attack until it is defeated.

So how do you get them out? Let’s look at a boss fight as an example of basic combat in this game.

When I defeated the next one, I was able to defeat the boss almost unscathed. Just understanding this way of fighting makes the battles in the game many times more exciting.

By understanding these three points, you can open the door to high-speed battles that induce a dopamine rush.

Wo Long’s block is weak, especially against strong enemies like bosses that break through guards if held for too long. Enemy attacks are merciless and have few openings. In this game, hit-and-run tactics can’t be used to sap enemy health.

Instead, deflect and create opportunities for attack. In the tutorial, we learn parry primarily as a way to deflect enemy attacks, but it also works as a counter.

A parry turns into a counter in two different situations. Either dodge the enemy’s attack during its special move and repel it with good timing, or counterattack by repelling it with R1 and circle.

The game is unstoppable once you start finding your own combos.

The counterattack against the enemy’s normal attack is particularly powerful, and you can counter it while recovering your energy gauge.

If you’re keeping a close eye on your enemy’s patterns during their relentless attack, you can use the Parry Counter to create your own attack turns. If a parry counter lands, you can hit the enemy with some basic attacks and use it to keep them stunned while building up your spirit gauge until you unleash a martial arts attack. If you keep passing out, you can follow up with magic. If you can do all this, you’ve knocked off a quarter of your opponent’s health (*Note that damage and enemy flinch are affected by weapons, phases, and builds. The experience described in is the result of a fire phase build).

The basic offense of this game is to use the energy gauge to perform combos and attack with parries. However, the game looks very difficult if you don’t understand this. For those who want to try the demo, and those who get stuck in the middle, we recommend that you play with this flow in mind. At first, simply landing a parry counter feels good, but once you start finding your own combos, the game becomes unstoppable.

Many battle flags and morale ranks in the area make exploration easier.

As you explore, you unlock battle flags in areas of the game that you can use as save points. Dying starts over with these flags, but the sheer number of them only in the demo area was remarkable. I was able to easily get back on my feet and try again.

Wo Long also includes level-based progression elements. In battle flags, you can strengthen your character using the earnestness (experience points) gained in battle. In addition, the character’s initial status changes depending on the phase selected at the start of the game, and you can also switch divine beasts, so you can try various strategies by combining divine beasts and phases.

In an interview with the game’s developer that took place alongside this demo, producer Fumihiko Yasuda recommended the combination of wood phase and Seiryu due to their restorative effects. they explore.

Killing an enemy will increase your morale rank depending on the enemy’s strength, but death will decrease your rank. However, there is also a lower rank to which morale cannot be lowered, and this lowest rank can be increased. In other words, if you raise the rank floor to 10, your morale will not drop below 10 even if you die.

Enemy morale ranks are always displayed and help determine if a particular enemy can be defeated in its current state. This was especially helpful when multiple enemies were visible during exploration. Because instead of trying to fight every powerful enemy that gets in your way, you’ll find that you can just walk through them.

All the battle flags made it easy to undo and start over.

I was able to play the game for about 5 hours, most of which was spent on how to beat the bosses. So, with the exception of the Fire Phase and Vermillion Bird builds, I haven’t had a chance to test different phases and Divine Beast combinations, builds, etc.The magic that can be used also changes depending on the phase, so I would like to try various combinations when the demo is released.

Wo Long is certainly a difficult masochist title, but you’ll find plenty of exciting, fast-paced Chinese martial arts combat to enjoy over and over again.

The release version of the game will also include PvP, which I can’t wait to see given how good Wo Long’s action is. If you are interested, why not try the demo version?